Home »Governance»Schools»Saving a remnant: most children left behind? 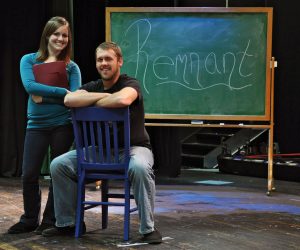 If the larger system will not make something similar to the classic trivium its priority–the grammar, logic and rhetoric as exemplified in great texts–should parents and students seek other paths of learning? Courtesy Grace College

The idea of a “saving remnant” recurs throughout the Hebrew and Christian Bible. Such remnants are presented as small groups that understand, apply and carry forward the truths and practices of a higher order of community. John in the New Testament quotes Isaiah in the Old Testament: “Though the people of Israel are as numerous as the sand of the seashore, only a remnant will be saved.” The idea suggests that, at times, the most important knowledge will be lost to the world, and most children will be left behind….In our pop culture, the current “big” story that might treat this theme is the Hollywood retelling of the Noah story. It will be interesting to see what they make of it.

The Athens that Socrates and Plato knew was similar to the society Noah left behind. Athens in their lifetimes was on the brink of a destruction that did in fact occur. It was a time and place of political turmoil, corrupt politicians, and a virulent desire for individual gain, an unbridled lust for wealth and power. In that dark time, Plato also turned to the idea of a saving remnant, trying to imagine how correct principles might survive in such an ignorant and nihilistic society:

[Socrates:] . . . the worthy disciples of philosophy will be but a small remnant: perchance some noble and well-educated person, detained by exile in her service, who in the absence of corrupting influences remains devoted to her; or some lofty soul born in a mean city, the politics of which he contemns and neglects; and there may be a gifted few who leave the arts, which they justly despise, and come to her. . . .Those who belong to this small class have tasted how sweet and blessed a possession philosophy is, and have also seen enough of the madness of the multitude; and they know that no politician is honest, nor is there any champion of justice at whose side they may fight and be saved. Such an one may be compared to a man who has fallen among wild beasts –he will not join in the wickedness of his fellows, but neither is he able singly to resist all their fierce natures, and therefore seeing that he would be of no use to the State or to his friends, and reflecting that he would have to throw away his life without doing any good either to himself or others, he holds his peace, and goes his own way. He is like one who, in the storm of dust and sleet which the driving wind hurries along, retires under the shelter of a wall; and seeing the rest of mankind full of wickedness, he is content, if only he can live his own life and be pure from evil or unrighteousness, and depart in peace and good-will, with bright hopes. –-The Republic

In our own time, Alasdair MacIntyre concluded After Virtue, one of the most influential works of moral philosophy in recent decades, with a suggestion that, at this point, the good life might be preserved by small communities that withdraw from the larger society in order to keep alive among themselves the ideals of civility and morality:

It is always dangerous to draw too precise parallels between one historical period and another; and among the most misleading of such parallels are those which have been drawn between our own age in Europe and North America and the epoch in which the Roman empire declined into the Dark Ages. Nonetheless certain parallels there are. A crucial turning point in that earlier history occurred when men and women of good will turned aside from the task of shoring up the Roman imperium and ceased to identify the continuation of civility and moral community with the maintenance of that imperium. What they set themselves to achieve instead–often not recognizing fully what they were doing–was the construction of new forms of community within which the moral life could be sustained so that both morality and civility might survive the coming ages of barbarism and darkness. If my account of our moral condition, we ought also to conclude that for some time now we too have reached that turning point. What matters at this stage is the construction of local forms of community within which civility and the intellectual and moral life can be sustained through the new dark ages which are already upon us. And if the tradition of the virtues was able to survive the horrors of the last dark ages, we are not entirely without grounds for hope. This time, however, the barbarians are not waiting beyond the frontiers; they have already been governing us for quite some time. And it is our lack of consciousness of this that constitutes part of our predicament. We are waiting not for a Godot, but for another–doubtless very different–St. Benedict.

Needless to say, such visions are anathema to today’s heirs of the revolutionary ideologies of the seventeenth, eighteenth, nineteenth and twentieth centuries, who envision an egalitarian society formed by subjecting everyone to universal principles, as discerned and articulated by a governing elite. One hallmark of their thinking is the idea that everyone needs to ordered into one large and centrally-administered system. Their recurrent attempts to ban and suppress dissent grows out of their sense that their plans won’t work if those outside the inner party are allowed to leave the plantation.

The obvious products of this vision include such laws as “No Child Left Behind,” which moves toward a nationalized and centralized education system and leads to the Common Core State Standards, which begin to put teeth in the vision by instituting a national testing regime, and by “The Affordable Health Care” law which in a similar way brings much of the health care industry under the control of a governing elite. The original founding vision of America, which George Washington and others communicated by citing Micah, is quite distant: “. . .they shall sit every man under his vine and under his fig tree; and none shall make them afraid.”

The standards movement as it has played out in the state where I work, Montana, has communicated a fundamental incoherence: while the law has promoted the belief that literacy and numeracy come first–since they are the subjects that are actually tested and reported–this has been unaccompanied by any clarity about how schools might accomplish significant improvements in these subjects.

In the case of English, this has remained one class among six or seven in each student’s schedule–which amounts to less than an hour a day for most students. Within that hour, teachers are expected to teach the full range of writing, from basic conventions such as pronoun antecedent errors and parallel structure, to proficient writing in several modes–persuasive, narrative, and expository–demonstrating their ability to write essays comparing various works, exhibiting insight into how point of view affect structure and meaning, and so on. That would be quite a lot, but the standards don’t stop there. Students are also expected to gain considerable background in English and American literature from the seventeenth through the twenty-first centuries in all the major genres, including poetry, fiction, and the varieties of nonfiction.

Where are the serious conversations about how such ideals might be realized? They do not seem to be occurring within the one, big system.