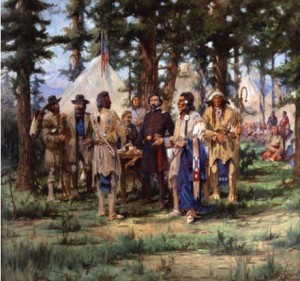 S.E. Paxson’s (1852–1919) rendition of 1855 negotiations between Isaac Stevens and chiefs of the Salish, Kootenai, and Pend d’Oreille tribes at Council Grove.

What was important about America was the experiment with rule of law linked to democratic processes. I’m ambivalent about using the past tense, but rule of law as a reality seems to me to be waning in America. It has powerful opponents, though they work not by attacking the phrase but by subverting how the words are understood.

Rule of law is, in essence, rule by principle. To make a law that will be applied equally to all members of a society, it’s necessary for them to abstract from the rather messy circumstances we always face to some more universal principle that most will consent to be governed by. When we encounter outcomes we don’t like, the work is to think more deeply and more clearly–to get beyond thinking merely “I don’t like this” to articulate a principle that would rectify the trouble while serving as a barrier to similar troubles in the future. That’s asking an awful lot of people, both intellectually and ethically.

Allotment on the Flathead Reservation and the consequent opening of the reservation to settlers who were not tribal members was, I think, an abusive use of law, orchestrated by powerful men for their own gain. Law is always susceptible to such abuse and it’s never hard to find examples of it.

I think it’s necessary to study and understand such abuses. We need to know what we are up against if we are committed to continuing the experiment. For me, the essential question is whether it is possible to subordinate power to principle. Can we encode our best understandings of justice into laws, and can we then use those laws to constrain the powerful and the greedy, who are always with us? Can we continue moving toward a world in which, ultimately, philosophy and ethics trump money and force?

I think the answer we get from the history of the nation’s dealings with natives is mixed.

We can find enough examples of low behavior and bad faith stratagems to satisfy a hundred Howard Zinns, who want to see the American experiment become something quite different. Such tawdry dealings are, to a great extent, the same old same old of human history. People with the power to do so gratifying their own appetites and lusts at the expense of weaker people is not uniquely American. It’s nothing new. It’s nothing we need to study American history to learn or understand. It was ancient before Columbus ever raised a sail.

What was somewhat new and somewhat different was that in America, middle ranking bureaucrats were dispatched to the wilderness to negotiate terms with small bands of hunter-gatherers, and that a hundred and fifty years later those sometimes vague and sketchy agreements are still taken seriously by the highest courts in the land, and that sometimes millions of dollars change hands based on some judge’s ruling about what those old words must mean.

There’s something noble in that, something hopeful. I think it would be a shame–and bad history–to teach what Joseph Dixon did without also attempting to make clear that he wasn’t the whole story.

Part of my teaching commitment is to increase young people’s ability to think at the level of principle. It’s something–but not enough–to feel bad when we see bad things happen to people who don’t deserve it. That’s something–where we start. It’s not, I hope, where we stop.